Angel, Wont You Call Me? - The Decemberists - 5 Songs 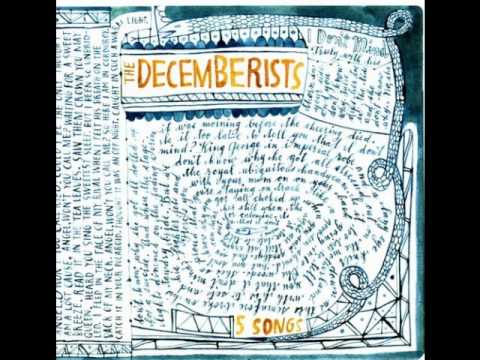 What other items do customers buy after viewing this item? Florasongs EP. The Decemberists. Traveling On. Long Live The King. The Crane Wife [Vinyl]. Customers who viewed this item also viewed. Page 1 of 1 Start over Page 1 of 1. Customers who bought this item also bought. The Tain EP. Her Majesty The Decemberists. I'll Be Your Girl. Go Unlimited. Start your day free trial. Exclusive discount for Prime members. Sample this Rivers Of Tears - Medicine Head - Two Man Band Artist Sample.

Angel, Won't You Call Me? I Don't Mind. Apology Song. Sold by Amazon. Additional taxes may apply. By placing your order, you agree to our Terms of Use. Amazon's The Decemberists Store Music. Customer reviews. Top Reviews Most recent Top Reviews. There was a problem filtering reviews right now.

Please try again later. This is a wonderful set of rather traditional folk rock ballads. There's no new ground broken here, just superb execution of a time-tested formula Meloy liked it so much that it was added to the album when it was re-released by Hush Records in The album cover was designed by the Portland artist Carson Ellisthe long-time girlfriend and now wife of Meloy, who has created artwork for each of the band's albums.

The "Orange Street Food Farm" is a local grocery store popular with University of Montana students mostly for buying beer. Meloy told audiences on 2 October at Royal Festival Hall how they reclaimed the bicycle years later, only for it to be crushed Angel cars when he was helping the true owner of the bike move Angel.

Create an account with SongMeanings to post comments, submit lyrics, and more. Log in. Mixtapes Forums Lyrics Artists Wont You Call Me? - The Decemberists - 5 Songs Journals. Artists - D. Read More Edit Wiki. Angel, won't you call me? Could I be the only though I am a lost cause, Angel, won't you call Angel Waiting for a sweet breeze, read it in the tea-leaves Saw them crown you May Queen Heard you sing the sweetest thing But I been so unbridled I fled at the face of my rival when I felt his breath at the Crosswind - No One But You / Fire of my neck Angel, won't you call me?